About Baseball from An Old Man

Posted on April 19, 2020 by donsalyardswinona 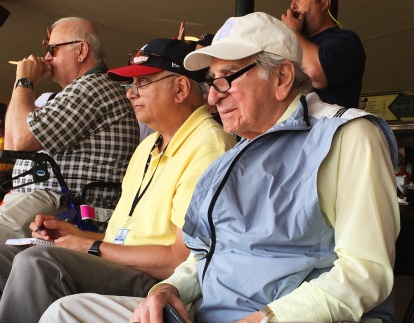 Middle age sportscasters often refer to baseball as “an old man’s game.”  This is partly because today’s youngsters have less interest in baseball than they did decades ago, but it is also borne out if you scan people in the stands.  There is never a shortage of “older gentlemen” at Target Field, Wrigley Field, Yankee Stadium or any major league ball park.  They may be accompanied by their wives, children, or grandchildren but many of these old men sit with a male buddy about the same age.

Now officially at an age where I can rightfully be called an “old man” I’ve paid more attention to my compatriots when attending baseball games.  These are men completely at ease, relaxed, and thoroughly enjoying each other and the ball game.  They may disagree about whether a pitch was called correctly or have differing opinions about the designated hitter rule, but there isn’t any place on earth that they would rather be!

When I enter a ballpark I walk up the ramps and look forward to finally looking out at the green grass.  It seems like only God himself could have created such a beautiful tabernacle.  People of all ages are “wowed” by such a view, but old men know in their bones that there is absolutely nothing so fabulous as a ballpark.  I’ve seen perhaps 75 games at Wrigley Field,  25 games at Target Field, 10 games at Kauffman Stadium in Kansas City and one game each at Fenway park, Citi Field, Bush Stadium and Turner Field respectively.  In every instance I say to myself, “Here you are, Salyards, enjoying a Major League Baseball game.  Some people spend their entire lives being a fan of this team and never once get to go to a game.  Don’t take this experience for granted, Salyards.  You are truly blessed.”

This year there may be no baseball.  Like every old man, my greatest joy of the summer is listening to games on the radio or watching on television.  Each day I look forward to a new game.  I can stream every game of every team on my mobile phone.    But this may be the summer when baseball never was.  What a shame, and what a horrible penalty for old men.

If you’re an old man I have a wish for you:

“May you not be so lonely without baseball;
May next spring training bring about hope and renewal for you;
May you listen to the radio on hot summer days visualizing the ballpark and the fans;
May you call your best buddy and buy two tickets to your favorite game;
May you both fully grasp the gift you’ve been given just to be at this game;
and,

May you live to see many more seasons of America’s greatest pastime.”

1 Response to About Baseball from An Old Man