Posted on October 4, 2015 by donsalyardswinona 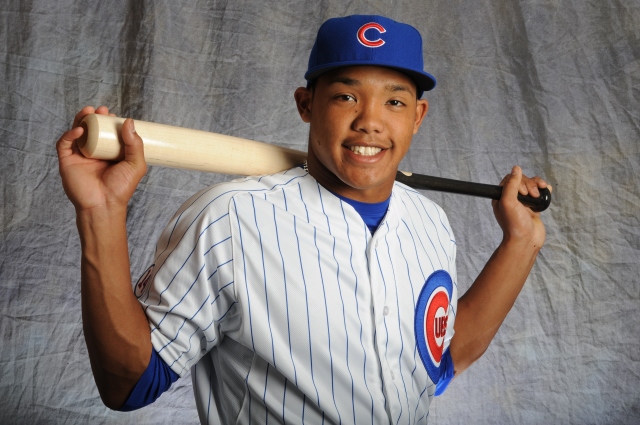 Addison Russell of the Chicago Cubs

The 2015 regular season in major league baseball is now finished.  Unfortunately the Twins did not make it to the playoffs.  The Royals are in again this year.  Madison Bumgarner won’t be ruining the Royals World Series hopes this year as the Chicago Cubs eliminated the Giants.  The Cubs earned the right to play the Pittsburgh Pirates (in Pittsburgh’s PNC park)  in a single-elimination wild card game this coming Wednesday night.  If the Cubs win they will play St. Louis in the playoffs.  Believe me, Wrigleyville is a buzz.

However, before the playoffs start let’s look at some interesing facts about baseball’s regular season.

Each major league baseball team plays 162 games during the regular season; 81 games at home and 81 games away.

During most regular seasons every team will win at least 60 games and every team will lose 60 games.  For example in this past 2015 regular season the St. Louis Cardinals, who had the best record in baseball with 100 wins, still lost 62 games.  On the other hand, the Philadelphia Phillies, who lost 99 games on their journey to the worst record in baseball, still won 63 games.

This season St Louis with 100 wins and the best record in baseball still won only 61.7 percent of their games.   This means that they lost 38.3% of their games.  Even the mighty Cardinals lost more than one of every three games they played.  The odds are against even the top teams in baseball to sweep a series, so if your team sweeps a 3 game series it is big deal!  Managers are correct when they emphasize the goal of “winning a series” because even winning two of three games is more than can be reasonably expected over an entire season.  After all, if your team won two of three games in every series for an entire season it would have a winning percentage of .666 which would mean 108 wins and only 54 losses.  This record would most certainly qualify a team for a division title.  In the modern (162 game) era of baseball only the 2001 Seattle Mariners (116-46) and the 1998 New York Yankees (114-48) have won more than 108 games.

Finally the record for the best winning percentage in the entire history of baseball (.764) is held by the 1906 Chicago Cubs, who won 116 games and lost only 36 games!  Moreover, in the 1906 World Series the Cubs were fortunate to be matched against the hapless Chicago White Sox (known as the “hitless wonders”) who had the worst team batting average in the American League!  It didn’t matter; in one of the largest upsets in the history of sports the White Sox beat the Cubs in six games!