Posted on September 5, 2015 by donsalyardswinona

Once in a while I snap a photo that looks really, really good.  I’m going to share two of them with you today.  Both of these photos were shot with a Samsung Galaxy Note 3 or 4 cell phone, although I’m sure that most smart phones have good cameras these days.  I’ve got a digital camera around here somewhere, but it is irrelevant now that my phone has a superior camera.  Besides, when that “photo opp” moment comes, your phone is in your pocket while your camera is usually in a drawer at home.

The first photo was taken on March 7, 2015 near Witoka, Minnesota at sunrise.  It was one of those “pull over, get out of the car” photos.  It is a reminder that every day we are given the gift of a cloud formation, a sunrise or a sunset so unique that it has never appeared that way before, nor will it ever appear that way again.  The only proper response to such beauty is gratefulness. 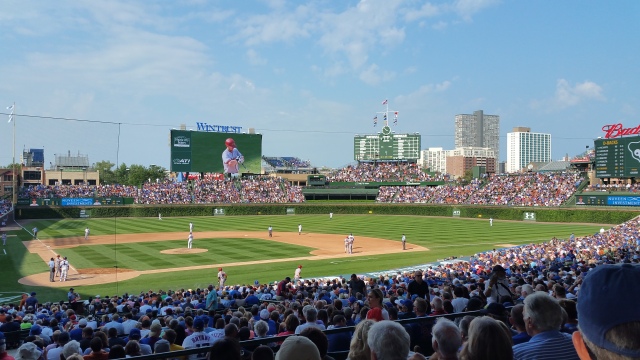 The second photo was taken this month at Wrigley Field.  The sun is shadowing the crowd but the field of play is in bright sunlight.  It looks like a photo that was altered to look like a painting but it is straight from the camera.  Those who have attended ball games at Wrigley will note that the two new “jumbotrons” are now installed, part of a 5 year renovation program.  The historic scoreboard above center field will not be altered and is as iconic to Wrigley Field as its ivy-covered brick outfield walls.

I’m no photographer.  I’m sure that anyone who has taken a photography 101 course in college could find plenty wrong with both of my photos.  It’s just the law of averages that one out of 500 photos will be a good one.  I hope you enjoyed them; that’s good enough for me!