The Case for Being a “Rational” Sports Fan

Posted on August 29, 2015 by donsalyardswinona 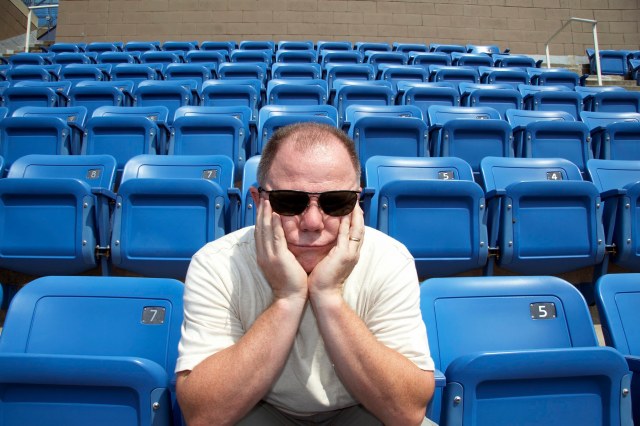 They say that the term “fan” is short for the word “fanatic” or an almost uncontrollable exuberance toward one’s favorite sports team. The common belief is that a “true sports fan” is gleeful when his team wins and suffers great emotional distress when his team loses. The true fan is glued to every pitch, every forward pass, and every shot from inside the blue line. His blood pressure can get quite high during a championship series. Losing a World Series, a Stanley cup or a Super Bowl can cause a “true fan” days or even weeks of depression.

I know because I’ve been there. As a fan I’ve had more than my fair share of positive experiences over my lifetime. As a kid growing up in Omaha I watched the Nebraska Cornhuskers win back to back collegiate national championships. When my kids were youngsters we rooted for the Twins in their 87 and 91 World Series championships. I’ve had the pleasure of cheering on the Packers in their 1997 and 2011 Super Bowl Championships. Most recently the Chicago Blackhawks have won three Stanley Cups in the past six years reaffirming again and again my decision to become a Blackhawks season ticket holder in 2009 when nobody wanted Blackhawks tickets.

The disappointments have been there for me also. I was depressed for a week when the Packers lost to the Broncos in the 1998 Super Bowl. I’m also a member of the world’s most masochistic group of fans on the north side of Chicago. The Chicago Cubs never fail to disappoint having won their last World Series in 1908, six years before Wrigley Field was built.

All of these ups and downs, elation and the sick feeling in my stomach over the past fifteen years have led me to adopt a brand new philosophy toward sports teams and sports in general. My approach is different from most, but for me it makes a lot of sense.

Here’s my take. It’s not my job to support my favorite sports team. The opposite is true. They are here to entertain and please me! So practically speaking how does this work out? If it is a close game or my team is pounding the heck out of their opponent I’m glued to the television. But if the Cubs or Twins are down by six runs in the second inning, I’m shutting the darned television off. I might check the score in an hour or so, but if there’s no improvement I’ve got a million better things to do than watch them choke. The same is true for the Packers, Twins, or Blackhawks. Notwithstanding that they are my favorite teams none of them are worth my personal suffering. It is their job to please by winning the game! It is not my job to dutifully suffer with them when they’re in distress.

There are folks who say I’m a “fair weather fan.” It’s OK with me if you want to use that label. I would instead reply that I’ve grown into a “rational” sports fan that maximizes my delight upon winning and minimizes my costs (irritation, sadness, frustration) if losing. It is the job of my teams to give me “fair weather” every game! I’m also a sports bigamist, rooting for two baseball teams (Twins and Cubs) and two football teams (Packers and Bears). We all lead busy lives with many great ways to spend our time. Fan or not, I’m not going to waste my time watching my favorite multimillionaires stink up the place. After all, where on the ticket is it written that I have to stay for the whole game and suffer? Likewise, where is the implied contract that I have to keep the television on until I’m depressed?  Try my approach. You might be able to stop taking your blood pressure medicine.

1 Response to The Case for Being a “Rational” Sports Fan