Posted on November 13, 2013 by donsalyardswinona 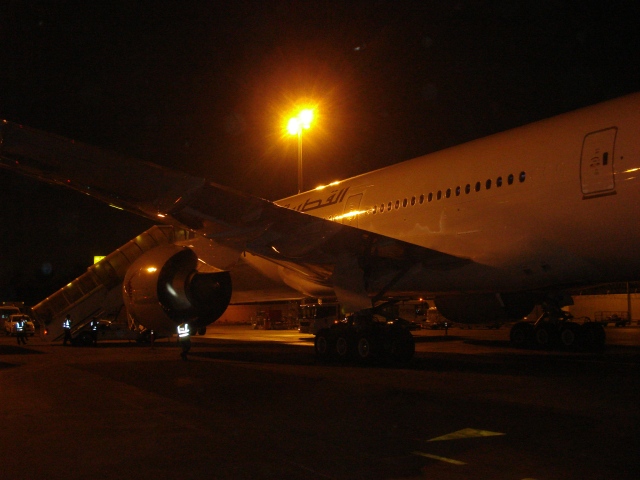 On The Tarmac in Doha, Qatar

When traveling to India from the Midwestern United States one usually goes east to Europe and catches a connecting flight to Bombay or Delhi.  This time (price is always a factor) I decided to try something new and go East to the Arabian Sea, flying Qatar Airways from Chicago to Doha, then connecting at Doha for the flight to Bombay.

The gulf states have gotten into the airline business big time.  Having flown Emirates I was aware of their new aircraft and excellent service.  Qatar Airways didn’t disappoint.  We flew on a virtually new wide-body Boeing 777 with three seats on each isle and three seats in the middle, for a nine-seat width.  There was plenty of leg room in this spacious aircraft but the reality is always the same; if anyone else asked you to sit in a seat for 12 hours inside an aluminum tube it would probably qualify as “torture” under some United Nations Definition!

The flight attendants were young, non-union, friendly and accommodating, which is a far cry from some of the Delta “hags” that I’ve had to deal with over the years.  Now settle down you Delta flight attendants; you’re not all mean, but the few “difficult” ones among you would be fired on the spot if they were employed with Emirates or Qatar Airways.  Just like the old days in the United States these flight attendants probably have to leave the occupation while still young.  I didn’t see any flight attendant over 35 years old on either flight.  However, the ethnicity of the attendants (male and female) was diverse with Africans, East Asians, and South Asians making up most of the service crew.

As I boarded Boeing-made aircraft from Doha to Bombay we went up a stairway to the back entrance of the airplane.  Most airports in warm climates provide a bus to the tarmac, where you climb stairs to the aircraft.  As we climbed about 35 stairs I realized that the horizontal stabilizers (the small horizontal wings on the tail of the airplane) were probably 30 feet off the ground…this is indeed a massive aircraft!