Posted on August 12, 2013 by donsalyardswinona

Right now I’m sitting out in front of my Greystone in the marvelous City of Chicago. It is a comfortable evening with temps in the 70’s and mild humidity. I don’t much feel like talking about closed embassies or whistle blowers this evening. Instead I want to offer some reflections on what I have witnessed in the last two weeks in Chicago, Omaha, Winona, and Minneapolis. 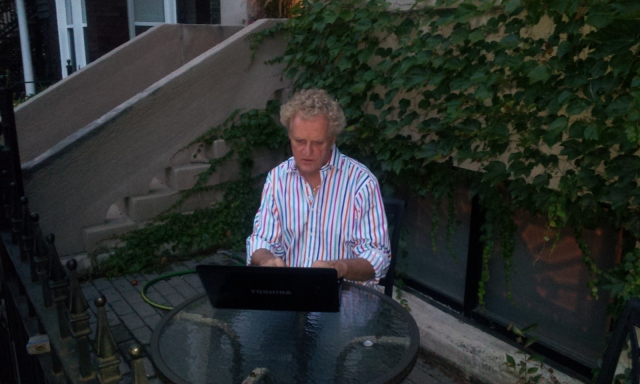 CHICAGO: Last week I was riding northbound on a city bus headed up Clark street to depart at Roscoe Street. I noticed a man, about 50 years old, sitting in front of me, but his seat was perpendicular to mine, giving me a “profile” view. His face was classic Eastern European (I think he was Czech). It was a bold face with high cheek bones and lined with years of living. He appeared not happy or sad; just pensive. A woman about 40 years old got on the bus with her 5 year old red-headed, freckle-faced daughter. The child was a sight to behold; skipping, smiling, and singing a little song! Her mother was also smiling and you could tell that she was enjoying this early morning shenanigans with her daughter. I smiled when I saw them; it brightened my day. Then, having viewed this mother and daughter, the Czech broke into a broad smile! He too was happy at the sight. There we were, two old men, observing one of life’s wonderful moments, just grinning together on the bus!

OMAHA: I grew up on Omaha and was there from the age of 9 until I graduated from high school. There were four families (the Salyards, the Williams, the Lairs, and the Leaches) who hung out together, raising their teen-aged boys and girls. We spent Thanksgiving after Thanksgiving gorging ourselves and watching Oklahoma and Nebraska play their annual football game. If the Huskers lost we were inconsolable for days. The friendships from those days transformed into inseparable bonds. When Alfred D. Williams (my best friend’s father) passed away last week, there was nothing that I would rather have done than to go to his funeral. Who attended? Of course, it was the Lairs, the Salyards, the Leaches, and the two sons of Alfred Williams. We celebrated the life of a man who was born in Los Angeles in 1931 and who swept the floors of the California Union Pacific Shops before becoming a machinist. He attended college at night, exhausted from his daytime work in the shops. In 1955 he took an opening for a draftsman job at UP headquarters in Omaha. He continued to attend college, getting an engineering degree and a business degree in the evening program at the University of Omaha. When he retired he was the assistant to a Vice President of the Railroad. That would have been enough, but Al was also incredibly kind, never criticizing others but just offering good “suggestions”. He was loved by many and it is my belief that he has entered those pearly gates in grand style.

WINONA: What is one to say about Winona, Minnesota except to say that it one of the most beautiful towns God ever created. The summer weeks have been marvelous, with bike rides, breakfast picnics, evening Mississippi river cruises, cuisine on the patio, and long walks. It is a place that I “stumbled” on 38 years ago, with my young wife and 3-month old son. There is never a time that I return to Winona that I don’t say a prayer of thanks for having the privilege of living there.

MINNEAPOLIS: The Twin Cities of Minneapolis and St. Paul are two of the most livable cities in the United States. This isn’t just my opinion; survey after survey bears this out. Minneapolis has lakes, trees, parks, clean air, and a marvelous skyline. It is prosperous, with many high tech jobs. But as far as I’m concerned Minneapolis is mostly great because of my two grandsons, Marek (5) and Silas (2). I got to spend Friday evening and part of Saturday morning with them. To watch Lisa and Tad raise those kids is a thing to behold. They don’t watch much television. Instead they go out and play in the back yard and dig holes and make mud pies!  Civil engineers in the making, they will learn to watch television soon enough!