Posted on June 16, 2013 by donsalyardswinona

As you know, my brother and I accompanied my Father on a railroad vacation two weeks ago.  The westbound destination for our trip was North Platte, Nebraska, home of the famous Bailey classification yard of the Union Pacific Railroad. 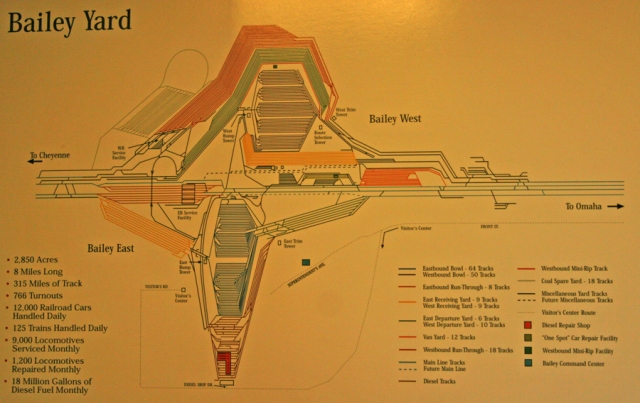 In the railroad business there is a continual and nagging problem; how to get railroad cars on the correct track so that they end up going to the intended town.  For example, if a 100-car freight train is traveling from Omaha to Kansas City, 15 cars might be switched off en-route at Nebraska City.  Eleven more cars will be switched off at Falls City, Nebraska and another eleven will be off-tracked at St. Joseph, Missouri.  With five cars leaving the train at Atchison, Kansas, the 56 remaining cars will go all the way through to Kansas City.  The point is that in Omaha someone has to switch the cars into separate tracks (one for Atchison, one for Falls City, etc) before the train could be “made up” for the final journey to Kansas City.

With a hump yard the task of switching cars is made much faster and costs are vastly reduced.  Two engines push an entire 120 car train slowly up a hill.  At the top of the hill the car is released and gravity brings it to a web of switches, sorting each car into one of 68 different tracks.  A man in a control tower at the top of the hill (hump) runs the engines by remote control and switches the cars from the tower.  The speed of each car is controlled by computerized restraining devices in the tracks so that the cars don’t bang together to hard and cause damage to the goods.  The hump is about 20 feet higher than the flat switch yard.  It doesn’t take much height to allow a free-rolling rail car to go a long way. 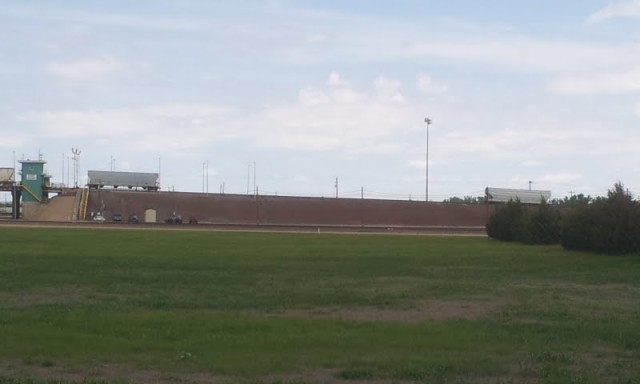 Hump yards have been around for a long time but the Union Pacific Railroad’s twin hump yards at North Platte, Nebraska constitute the world’s largest railroad classification (switch) yard.  About half way between Cheyenne, Wyoming and Omaha, Nebraska the Bailey (named after former UP President Edd Bailey) yard is over 8 miles long and two miles wide.  It sorts over 3,000 cars per day over its two humps.  Over 14,000 cars a day run through the Bailey yard.  The facility also repairs, refuels and services hundreds of locomotives every day.   The Union Pacific trains through North Platte travel to destinations all over North America, from Canada to Mexico and the east and west coasts.  Some economists have referred to the volume of traffic through North Platte as an “economic barometer of the United States”.