Announcing the birth of the “New Republicans”

Last week at the Minnesota Republican convention, the last 13 of 40 delegates were picked to represent the State of Minnesota at the Republican National Convention in Tampa, Florida.  The list below was circulated among the delegates at that convention to encourage them to vote for the “Conservative Unity Slate” endorsed by Mitt Romney.

This is the slate of 13 delegates that the “Old School Republicans” put before the voters at the MN Republican convention.  These are the same people that have run the Republican Party for years and years, through deficit on top of deficit, unable (or unwilling) to cut Federal Spending.  As you look at the names on the slate of 13 delegates and 13 alternate delegates, there is only one fact worth mentioning:  NONE OF THESE PEOPLE WERE SELECTED AS DELEGATES TO THE REPUBLICAN NATIONAL CONVENTION. 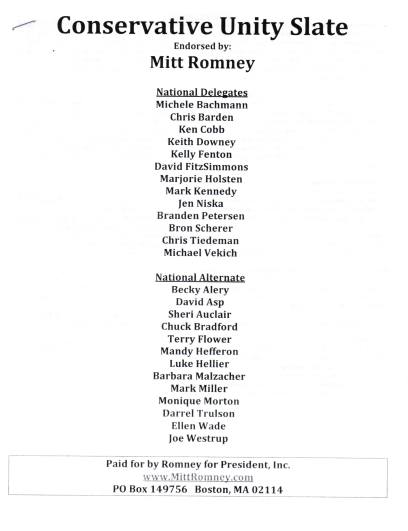 The thirteen delegates that were selected were Ron Paul’s delegates.  In total, 32 of the 40 delegates to the MN National Republican Convention are Paul delegates.  This isn’t just an aberration, it is a massive shift in voter sentiment.  While the “Old Men” were circulating copies of the list (at right)  among convention delegates, the Ron Paul supporters were voting for their own list, as displayed by the “tweets” received on their cell phones.   The Old School Republicans never knew what hit them; they were out in a flash.

Even Republican Congresswoman Michele Bachman didn’t garner enough votes to attend her own National Convention.  Only through the “gift” of an elected Paul supporter, who allowed Bachman to take his place at the convention, did Bachman get a “ticket” to the convention.  Imagine; a sitting US Congressman needing alms from a Ron Paul delegate to go to her own national convention!   I think that this “gift” was a mistake on the part of the Paul delegates.  It would have been interesting to see press coverage of a US Congressman who didn’t get enough republican votes to attend the national convention of her party.

The problem for Ms. Bachman and the old republicans is that the party they used to belong to now has been reborn.  The “old republicans” haven’t cut Federal spending, never saw a war they didn’t like, can’t stand gay marriage, and want to tell a woman what to do with her uterus.  It looks like Republican politics as usual is gone, at least in Minnesota.  Young people, old people, tea party supporters, independents, and even democrats, are finally fed up with a government that is on the brink of bankruptcy and runs roughshod over personal liberties.

These “new” Republicans are more libertarian than their predecessors.  They’re SERIOUS about actual cuts in government spending (not just a reduction in the increase in government spending that satisfied the Old Republicans), but are sick of the requirements of the extreme Christian right.  These new Republicans champion both economic freedom and civil liberties.  Let’s hope they can elect some congressmen and senators before this country falls off the fiscal cliff.