Posted on October 2, 2011 by donsalyardswinona 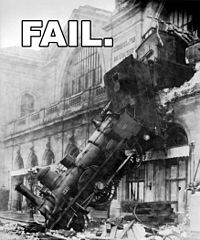 Very few words connote a more negative image than the word “failure.”  Everyone wants to succeed.  No one wants to fail.  Failure invites criticism and ridicule.  Failure is psychologically hurtful.  It is often thought that too many failures limit one’s credibility within their families, businesses, and in the larger society.  It’s too bad that failure gets such a bad rap; in fact it may be the only sure method for human and societal improvement.

I have often said to my students, “Show me a man who has never made a mistake and I’ll show you a man who hasn’t accomplished much.  Show me a man that’s made many mistakes and you’ll find a successful person.”  Most of us learn from our mistakes and failure.  In fact, these are often the best learned lessons that are probably not going to be repeated.  Life progresses, and we slowly hone in on actions and activities that make us more successful.

In the internet world and among younger people there is a phrase “Epic Fail.”  Normally it is a video showing some kid on a skateboard that misses the mark and falls flat on his face.  Or, it might be a guy with a snow rake who tries to remove a small amount of snow from his roof, causing an avalanche to crash down on him.  These types of failures are not “epic” or significant in any way.  To be a true “epic” failure, a number of experts have to be involved in the incident, which turns out badly.  A nineteenth century “epic failure” might include the train crash above.  A twentieth century “epic failure” would be the explosion of the space shuttle.  Sorry kids, but Charlie smashing his testicles while riding a skateboard is neither “epic” or a “failure”; it is small-time jackassery.

Thomas Edison experimented with over 1,000 combinations of gas and filament before he succeeded in inventing the incandescent light bulb.  A science editor asked him how it felt to fail 1,000 times.  Edison remarked that he didn’t fail; inventing the light bulb just happened to be a 1,000-step process.  In life and in businesses, we often must take risks.  Of course, relative risk and reward must be estimated.  In most worthwhile pursuits failure is a distinct possibility.  But honestly, the only real failure in life is being afraid to try.

I once read a pamphlet in my youth.  If was called “Fear of Failure.”  The statement I remember the most is “Take a look at the stars in the sky.  It took millions of years for the light that enters your eye to travel from the star.  During that time billions of people have been born, lived and died.  Entire nations have come and gone.  In this universe of infinite time and eternity, what possible significance can it be that you failed in your business, or made a mistake?”

The great painter Vincent van Gogh once said:  “What would life be if we had no courage to attempt anything?

This entry was posted in Personal Commentary. Bookmark the permalink.