Posted on March 21, 2010 by donsalyardswinona 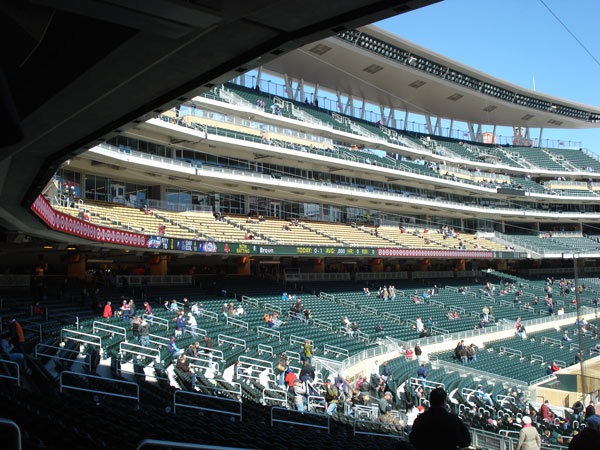 Saturday March 20, 2010, I got a chance to take a close look at Target Field, the new home of the Minnesota Twins.  My son, who works for Target and has looked down on its construction for nearly three years, has grown more and more excited as the work has progressed.  On the other hand, until Saturday I hadn’t even laid eyes on the place.

A few months ago, on October 11, 2009, I blogged about the Twins’ new ballpark, citing the lack of a retractable roof and a small canopy as “serious shortcomings.”  I still believe this to be the case, but with respect to everything else, the new Target Field is absolutely fantastic!  Of course, one would expect that you would get a pretty neat place for $522 million.  We have Hennepin County taxpayers to thank for roughly $400 million of that total.  However, the Minnesota Twins shelled out $125 million of their own money, a lot more than most MLB clubs have contributed to their ballparks.  In an era famous for taxpayer subsidies to rich owners, the Twins organization has shown its dedication to Minnesota.  From the smiles I saw on the faces of fans touring the new Target Field yesterday, the feeling is mutual!

One thing that new ballparks have is excellent concession venues.  The food and beverage choices are varied and numerous at Target Field.  The Mill City Grill, Hennepin Grille, Frankie V’s Italian, and North Shore Creamery represent just a few of the eateries within Target Field.  You can buy Budweiser beer or a Summit beer.  You can expect to get a Schweigert hotdog at the park, but you can also wrap your lips around a genuine Kramarczuk’s sausage, straight from Northeast Minneapolis.  Caribou Coffee is available and there is a great Twins pro shop where you can buy anything from a Justin Morneau jersey to an official Twins stocking cap!

There are special lounge areas for season ticket holders and regular fans alike.  The lights are mostly imbedded in the canopy; making for clean, modern lines.  The stone is Minnesota travertine limestone; even the dugouts are made of travertine.

My daughter, who now lives just two blocks from Wrigley Field on Chicago’s north side, was brought up a Twins fan.  Like her brother, she watched the Twins win two World Series Championships in her youth.  Understandably she has a tremendous respect and attachment to both the Twins and the Cubs.  As we talked about the comparisons between the new Target Field and historic Wrigley Field (circa 1916), the many advantages of a brand spanking-new facility were obvious.  But Target Field has no ivy walls.  Past the Target Field outfield walls there are no splendorous Victorian Greystones.  In the Target Field neighborhood there are no streets with the character of a Sheffield or Waveland Avenue.  And, of course, Babe Ruth made his famous “called shot” at old Wrigley Field.

On Tuesday, April 12, 2010 my daughter and I will attend opening day at the “friendly confines” on Lake Michigan.  However, during that exact date and time, our thoughts will be purposefully distracted as we think of nearly 40,000 Twins baseball fans that will be ushering in Opening Day at their new Target Field.  Minnesotans should be proud.  On April 12th, 2010 one of baseball’s finest and most productive organizations will stake out a landmark day in Twins history.  I sincerely wish the Twins impeccable success in their new home, the beautiful Target Field.  I plan to attend as often as possible.

This entry was posted in Personal Commentary. Bookmark the permalink.

5 Responses to Target Field is Fantastic